Port of Virginia begins expansion and breaks another record.

Someday we’re going to report on a year where the Port of Virginia isn’t breaking records. We’ll discuss what ways we can deploy to reinvigorate our ocean cargo and reminisce on the glory days when we were posting almost relentlessly on how grand numbers had been “back in those days”. Well, dear readers, that time isn’t here yet, because even amid all the construction, changes and expansion, the Port of Virginia is still going like gangbusters.

In the fiscal year 2018, the Port of Virginia handled 2.8 million TEUs, a 2.4% increase over 2017 (which was, we remind you, a record breaking year). Despite being in the middle of a $700 million expansion, which did impact port traffic as April, May and June saw slight declines due to fewer empty containers moving during construction, the port is more successful than ever. 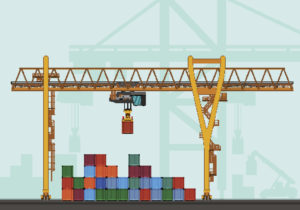 In addition to the record breaking fiscal year, six rail mounted gantry cranes were delivered in late July. These cranes are the first of 60 new cranes that will help boost the port’s capacity to 400,000 units. Alongside the 55 foot dredge depth that was just approved by the Federal Government, the $375 million expansion is considered well underway. As these projects begin to come to fruition, the port isn’t worried that there will be delays due to construction.

“This is the stage when things begin to come to life at NIT,” said John F. Reinhart, CEO and executive director of the Virginia Port Authority. “Our goal is to put this equipment to work as quickly and as safely as we can, just like we are doing at VIG. As these stacks go online, we will begin capitalizing on the new capacity and efficiency we’re creating. The end result of our effort will be new high-performing network of terminals that will attract economic investment in Virginia and spur job creation across the commonwealth.”